Brexit - 5 years after the referendum. 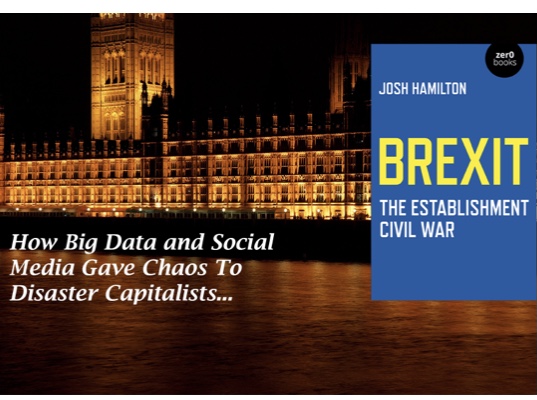 Today's episode (S7  E4)  was an interview with author Josh Hamilton. His debut book, Brexit: the Establishment Civil War was published yesterday, March 1, 2021. He is also the editor of a UK based political website called The Jist.      https://thejist.co.uk/   He is based in Belfast, Northern Ireland so he is living Brexit.

The book is a must read for political practitioners or campaign managers who are grappling with social media micro marketing campaigns for their clients.  https://establishmentcivilwar.co.uk/

The 2016 Brexit campaign was a departure for British politics. Political advertising on the TV and radio is not permitted in the UK. Politics and campaigns are waged the old fashioned way, on the doorstep and one on one with voters. The occasional rally is a low key affair and a far cry from Trump's MAGA rallies. So when firms like Cambridge Analytica brought their high powered data mining and profiling capabilities to bear, it was a dramatic departure from historic practices.

The vote was close, 52% to 48% on a UK wide basis. But regionally, Scotland 62% and Northern Ireland 55% opted to remain in the EU while England and Wales wanted out. With such a close result and regional disparities, the battle for votes resembled hand to hand combat which also required deep voter profiling.

And once the result was clear, it still took 4 1/2 years to get Brexit done, claiming the scalps of two former Prime Ministers, Cameron and May.  The nation was highly polarized on the issue which is par for the course for a Social Media driven cause. Is Social Media the cause of political and social polarization or are contentious issues drawn to the Social Media forums ?

Disaster Capitalism, a term coined by Naomi Klein, may be the end result of Brexit according to Hamilton, providing lucrative deals for opportunists.  Remember Rahm Emmanuel's quote in the 2009 financial crisis ? Never late a crisis go to waste !   The break up of the UK with Scotland demanding a second independence referendum and Northern Ireland still within the EU's Single Market, unlike the rest of the UK, is a distinct possibility.  In the end, the populist rallying causes like anti globalism, take back sovereignty, anti immigration that fueled the Brexit victory, are unlikely to come to pass.

When Brexit was finally achieved on January 1, 2021 there seemed little cause for optimism. Conservatives look forward to creating an aggressive free market economy on the edge of Europe offering low taxes, investment incentives and laissez faire policies on the environment and labor. A Singapore-on-Thames if you will.

The book is a must read for US political strategists too. The Brexit campaign lessons  and sophisticated use of meta data to tailor hard hitting political messages to sway voters, gave Donald Trump his victory in 2016 over Hillary Clinton. And while he lost the 2020 election, he did win almost 75 million votes, an increase of 12 million over the 2016 result.

Josh Hamilton's book is available on Amazon and some  independent booksellers. Again, here is the link:

And listen to Josh's engaging podcasts on https://thejist.co.uk/